It may sound weird, but Sakhalin wasn’t my final destination. Actually, I was aiming for Kuril Islands, but it was impossible to get to Iturup island without stopping in Yuzhno-Sakhalinsk . Just after we had landed arriving from Moscow, I immediately regretted, that I didn’t have enough time to explore the island and the city itself. Sakhalin is a magnificent place for an adventure, a cool photo session and a great gastronomic experience! Now I am dreaming of coming back. Actually, I managed to do maximum exploration I could during just two days I had spent there. Now I’m going to tell you about it. 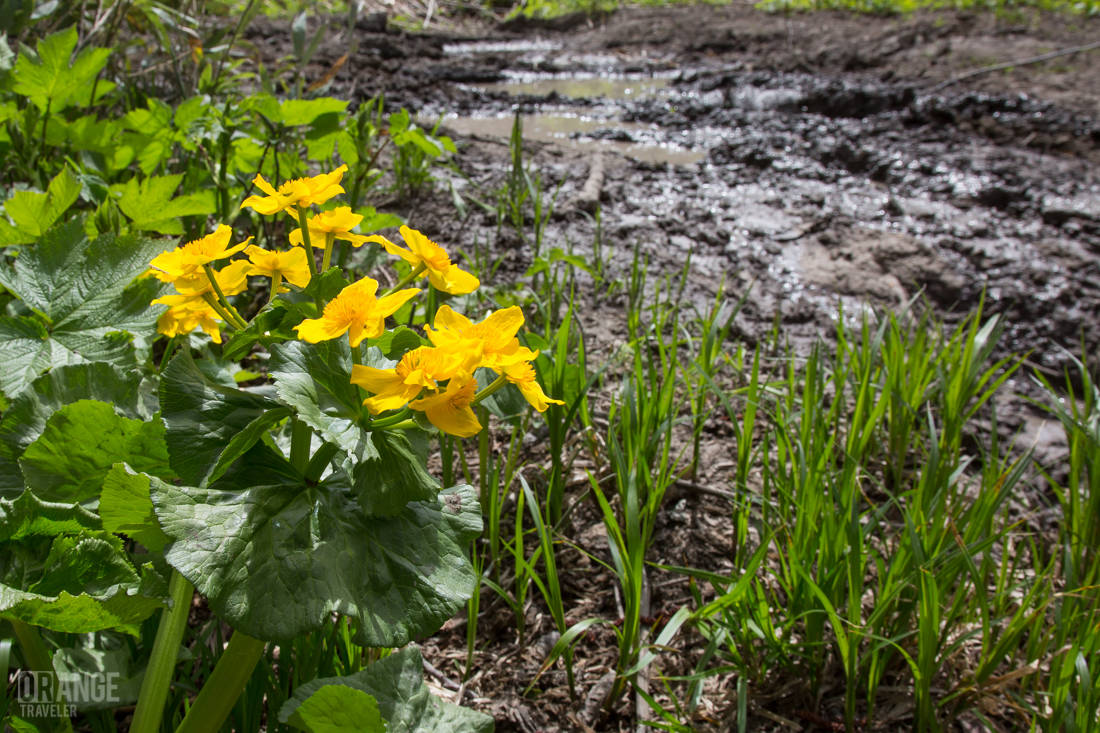 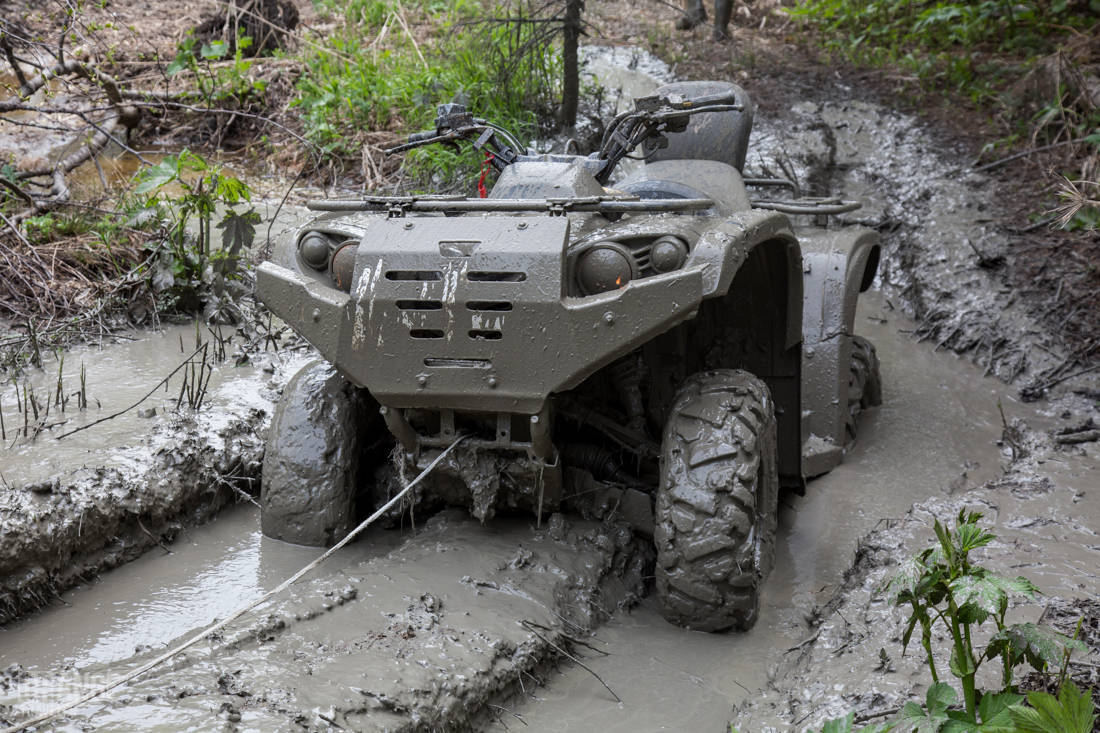 There was supposed to be a lot of mud and it was supposed to be fun! So was it. Except I have never been so filthy. All the Sakhalin off-road dust was in my hair, it also scratched my sunglasses (that’s why you should pull the visor of your helmet down!). The white one-time-use suit given to me at “Start-DV” office got super dirty and seemed to collect all the spines, I brought about two kilograms of clay and mud on my boots! But it seems like the aim of this event was to get all filthy. Or why was I crossing the brooks and the deepest puddles riding a car called “Kvadropride”? 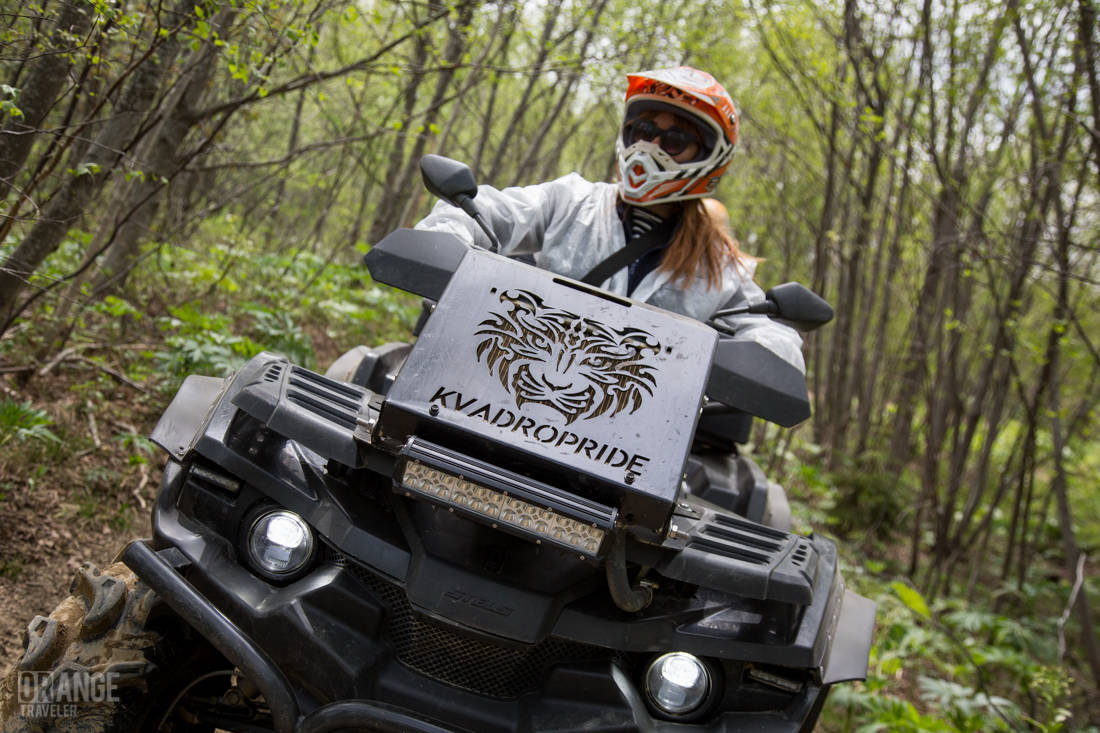 We were driving somewhere near Elochki village, during our adventure two cars were damaged - the seat belts had ripped, also, one of the cars was thrown off the road, guys didn’t manage driving there as the road was so tough and the speed was so high. But so many landscapes had changed during the way - a forest drowning in grass, an old Japanese railway, country houses, where I would definitely want to steal some pears if I were there in summer, we also saw dark railway tunnels, where the snow hadn’t even melted by May! We were getting stuck in dirty and deep puddles in the forest, don’t even ask me why - just for fun! 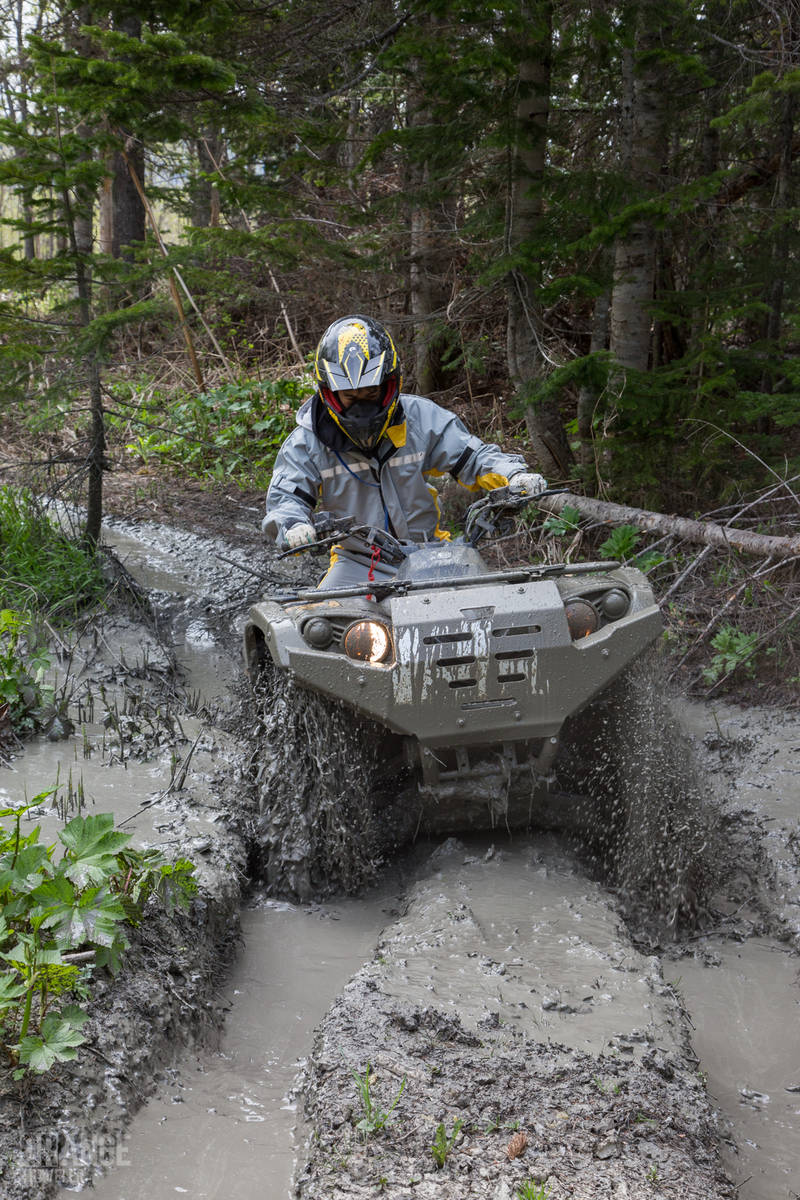 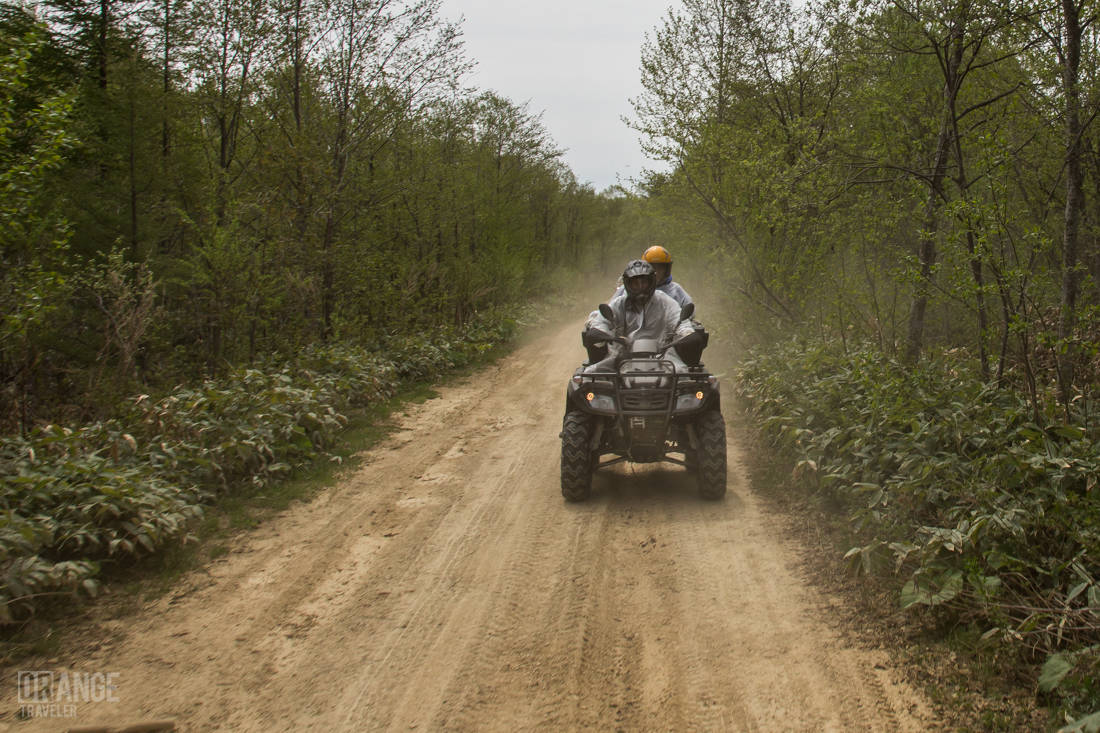 The price for renting this vehicle starts from 15000 rubles, include transfer from the hotel, uniform, insurance and USB card with pictires. 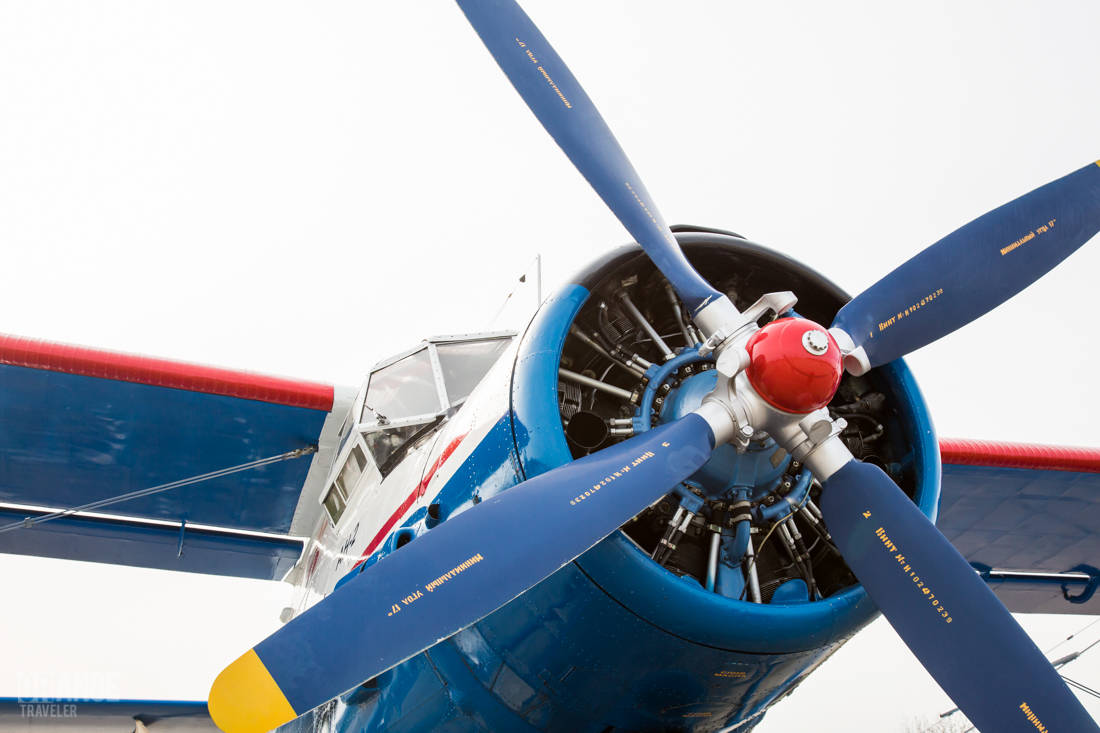 “AN-2” is, of course, a reliable vehicle, but the fact it was pretty old was freaking me out a bit. I’ve never flied such planes , but when I saw those brutal, but charismatic pilots from the Centre of technical sports, I relaxed. The plane could accommodate just a few people, actually, 12. A 13th one could not get in no matter what. The placing of seats was comfortable for legs, but disappointing for eyes - we had to sit with our backs towards the illuminators, when the views were so fascinating! And it was necessary to fasten seat belts. The pilots instructed us and firmly asked not to open any doors during the flight and not to leave our seats without a permission. 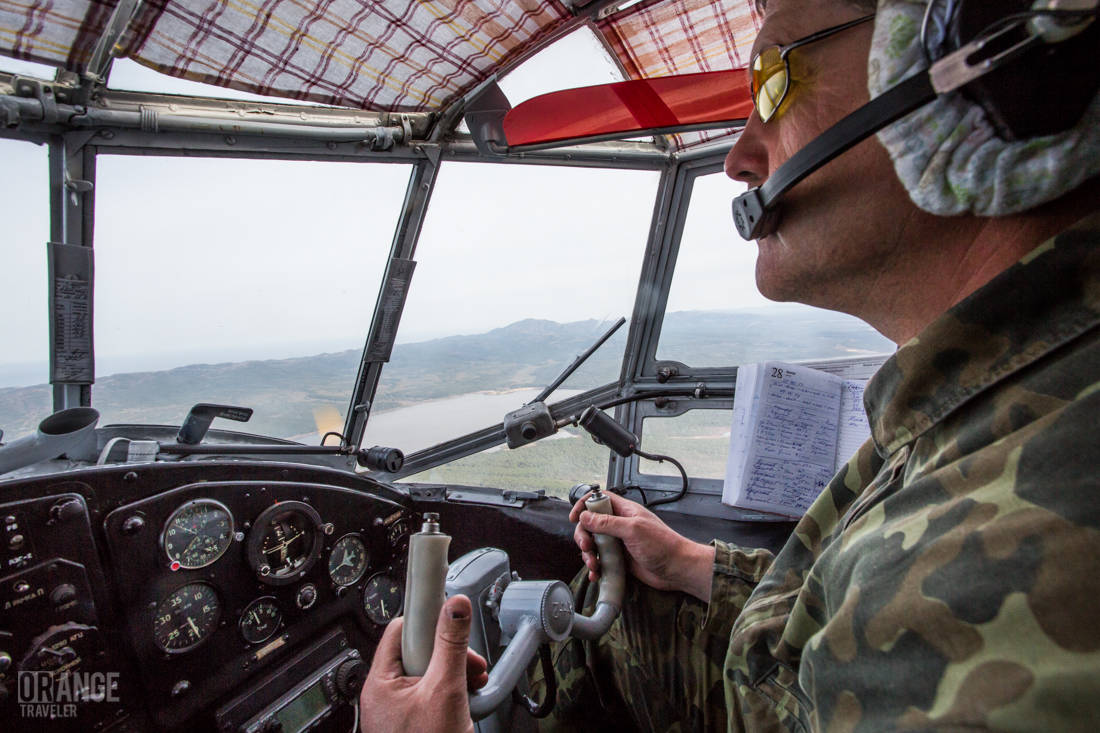 Actually, the permission was given in two minutes after takeoff already. So, we quickly unfastened the belts and glued to illuminators, moving the checkered curtains away - it was cosy by the way! According to the plan, the airplane should have flown around a part of Sakhalin island. Endless green forests, hills, Izmenchivoye lake, the waves of Strait of Tatary, Cape Giant, the old lighthouse. 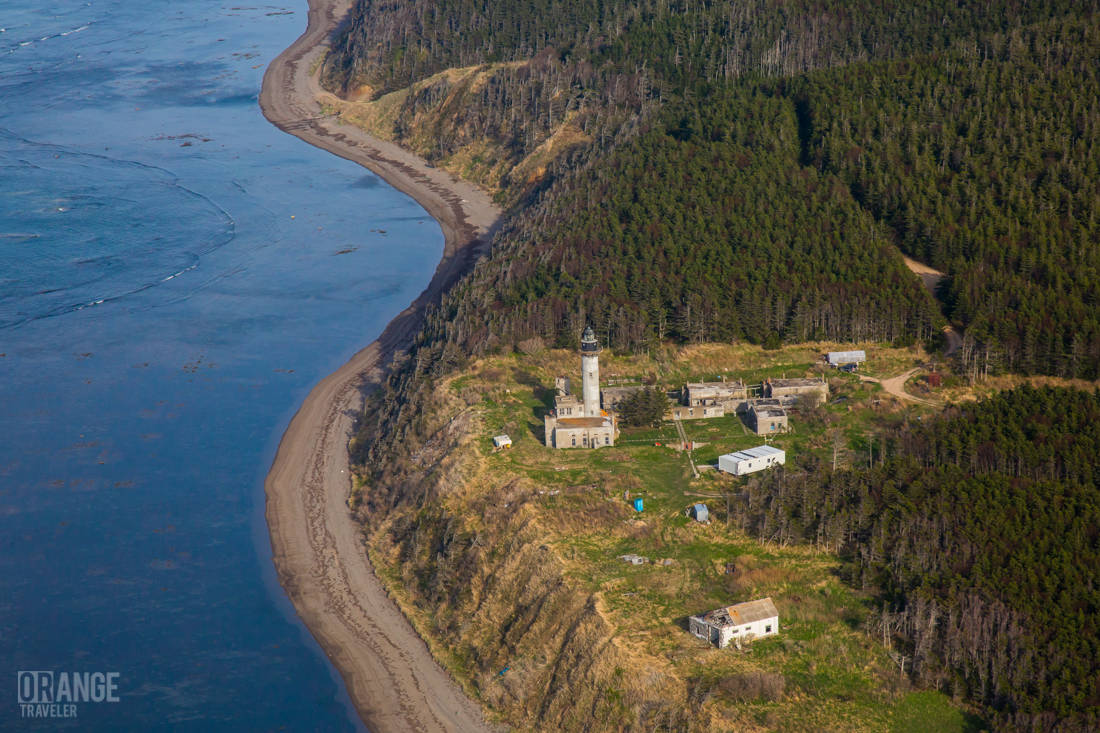 On the other side - La Pérouse Strait that divides Russia from Japan, Hokkaido island. It’s clearly visible from above, that Sakhalin looks like a fish. Soon after takeoff the pilots allowed us to film from the cabin, it was a rare chance to see the world through the pilot’s eyes. After circling above the island for an hour, we returned to the airport “Pushisty” (which means “fluffy”), and the landing was soft too, for sure. Who had created such a name? I am sure they were geologists, only they could give such a deep sense to a name! 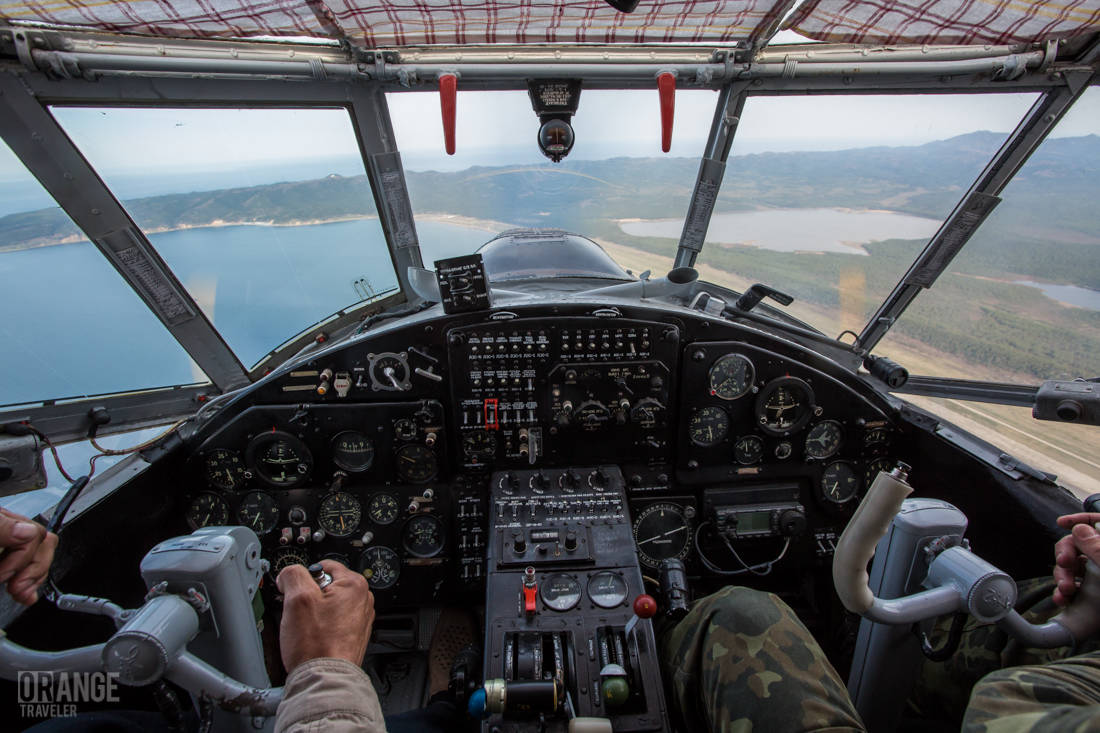 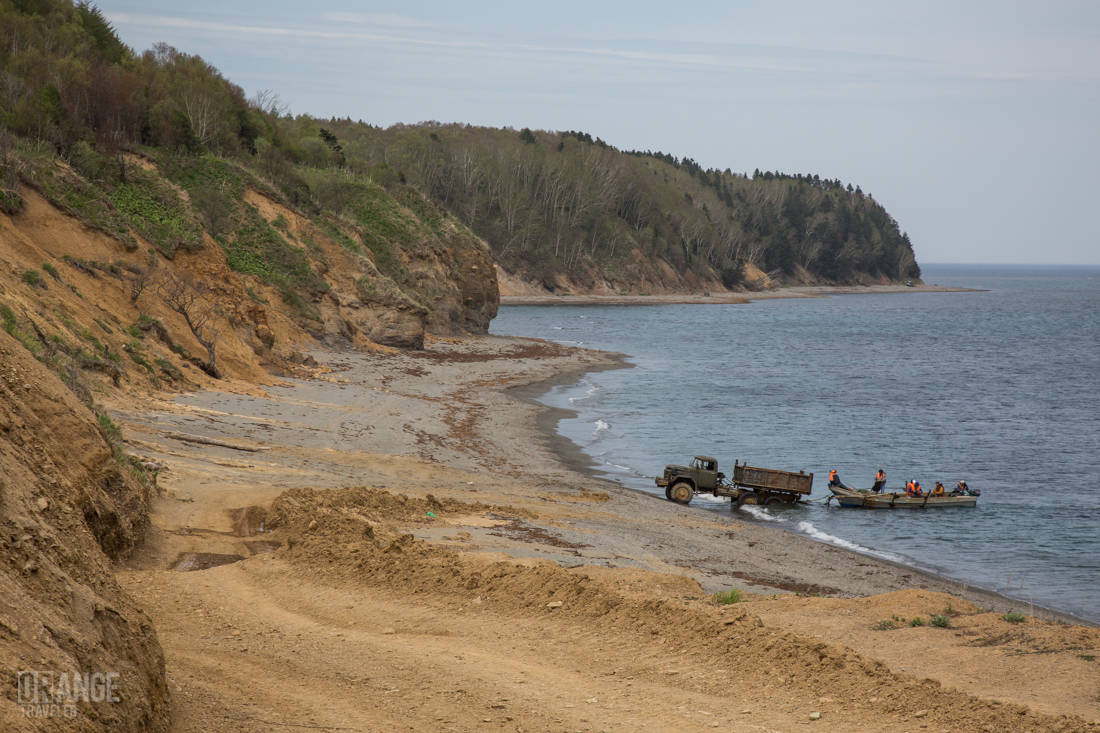 Curious seals were swimming around our small boat watching us with interest. Just after we had started our voyage we saw their heads above the water. Gulf of Patience is a really brutal place, there were rough and tall pines along the shore, dark waves were shaking the boat pretty strongly. Sometimes the ice can appear there In the beginning of May, it comes unexpectedly and rapidly and disappears the same way. 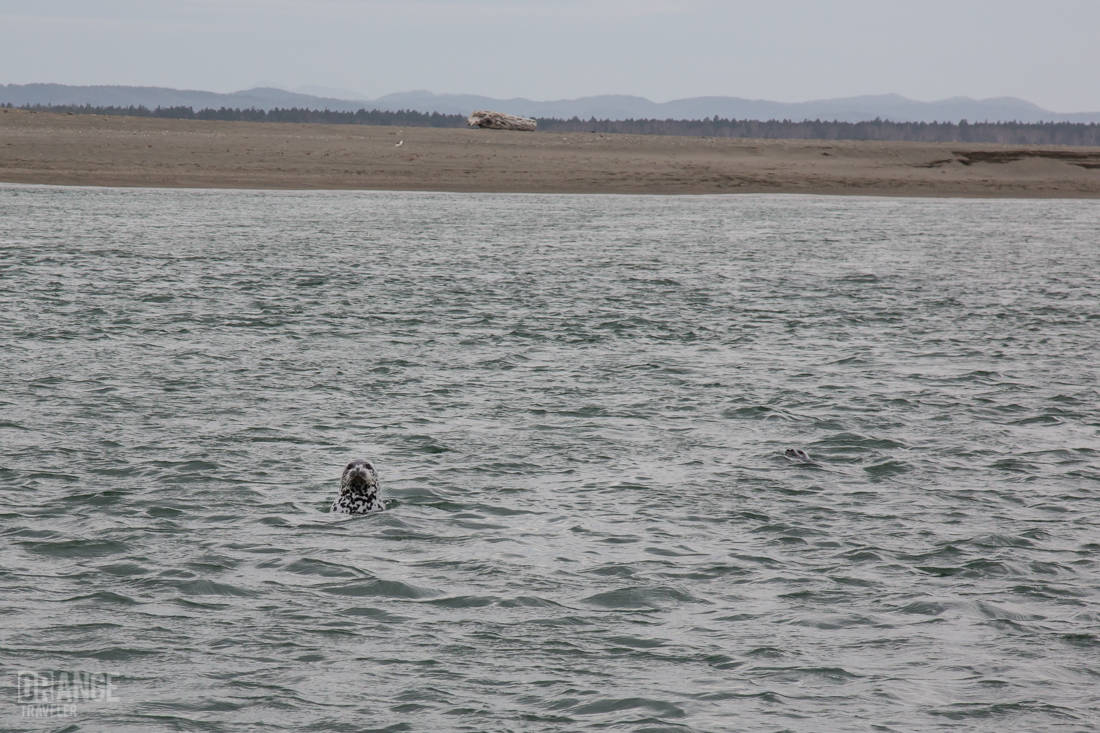 It’s chilly in the humid smoke, but it’s alright in a warm huge size wind proof jacket. Fishermen come here, to “Aquamarine ” base to fish and catch some crabs, it’s half an hour away from Yuzhno-Sakhalinsk, and in half an hour more that you spend on parking, changing and transferring to the boat and you’re in the Sea of Okhotsk. Plus 8-hour flight from Moscow. But it’s worth travelling so far, it’s, probably, the best Sakhalin can offer. When you’re waiting impatiently for another trap to appear from under the water, which can be found by GPS, and guessing how many crabs can be found there and what kinds of them. 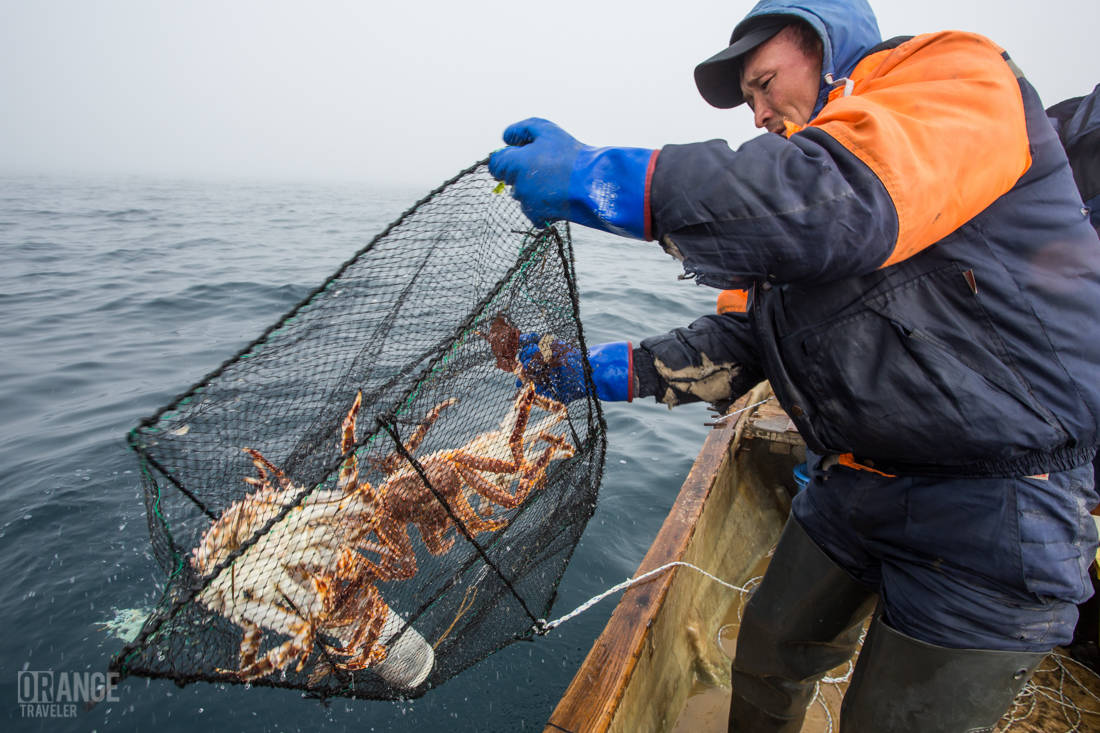 It was a surprise for me, that there are five kinds of crabs that are edible in that area (well, that’s fine for me, it was my first time on Far East). All the crabs were instantly cooked in a big pot in the backyard. My favourite ones were the Hanasaki crab and the Blue crab, although I tried all of them. 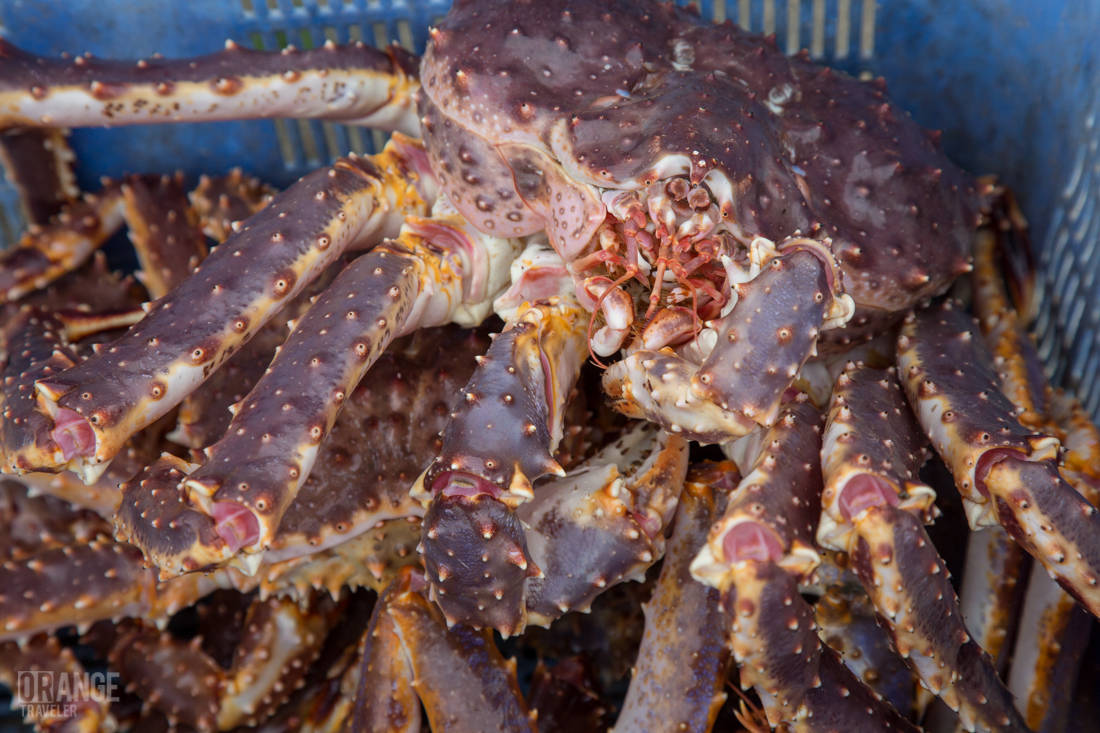 The price for fishing on “Aquamarine” base is starting from 4500 roubles per person.

So what have not I seen? 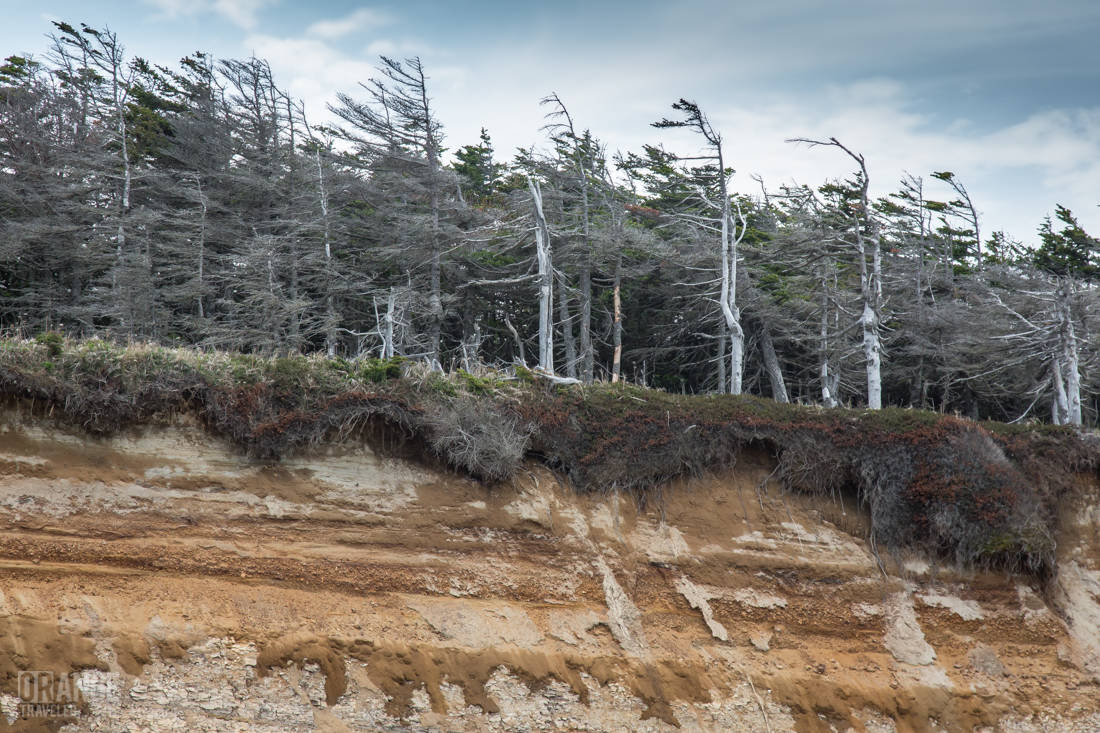 All excursions were booked on RocketGo.
English version by Valeria Anisimova: @valerianix_